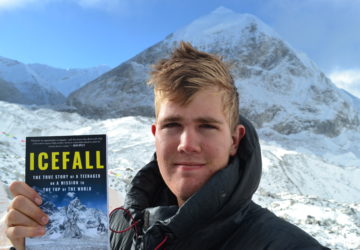 Aged just 22, Alex Staniforth is a record-breaking adventurer, inspirational speaker and author from Cheshire.  He has already made two attempts to climb to the top of Mount Everest.  Now he is dedicated to inspiring others to overcome their own ‘Everest’ in life.

Alex is no stranger to adversity: overcoming epilepsy, stammering and bullying in earlier life.  More recently he has openly suffered mental illness including depression, anxiety and an eating disorder.  Through his story Alex is a compelling example that obstacles are an opportunity to win.  His achievements include raising over £85,000 for charity, numerous endurance challenges on foot and bike, carrying the London 2012 Olympic Torch, releasing a book “Icefall” (endorsed by Bear Grylls), becoming an ambassador for Westgrove Group and the Youth Hostel Association (YHA) and a director of a social enterprise to help young people achieve their potential.  Alex is a highly-regarded speaker to all audiences, having spoken to over 7,500 people so far.

In 2015 his second attempt to climb Mount Everest ended in disaster after narrowly escaping an avalanche and the Nepal earthquake, which took the lives of three of his team. In 2016 he returned to the Himalayas and reached 7,125 metres on Cho Oyu, the sixth highest peak in the world.

In 2017 he became the fastest person ever to climb all 100 UK county tops by bicycle, foot and kayak, covering over 5,000 miles in 72 days self-supported and spreading the message that mental illness is not a sign of weakness, and that together we can overcome any mountain.

“I have my challenges – but they don’t have me!”

Alex is available to share his inspirational story in schools.