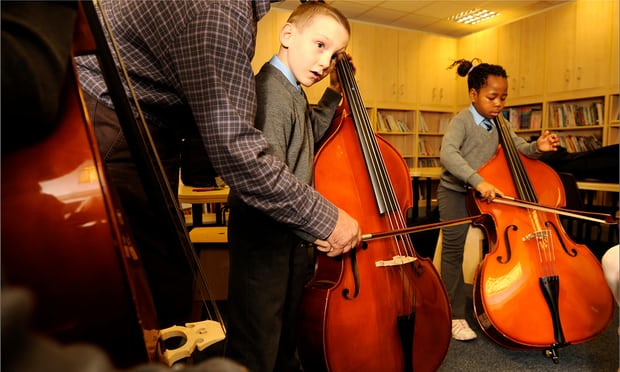 I wholeheartedly agree with your letter writers (British artists: Ebacc will damage creativity and self-expression, 9 May) and feel very disillusioned that, as a parent of a child in year 3 at primary school, there is nothing to look forward to regarding the teaching of the arts in secondary school as I’d hoped. Sadly it is not just secondary schools that have a declining inclusion of the arts as this is also an issue in primaries. Schools are geared towards teaching the subjects that are tested in Sats in years 2 and 6 and there is a growing danger of children being seen as a statistic rather than an individual. In our local primary, despite music being on the national curriculum, there are minimal opportunities for children to learn an instrument. Primary school should be the place where there are endless opportunities for children to try a variety of activities and be encouraged to use their creative sides to become unique individuals and not forced into the same mould.

Evidence from the Economic and Social Research Council’s Understanding Society data (involving over 30,000 people) shows that people who engage more in the arts become more generous to others with both their time and money. The Ebacc’s likely curtailment of young people’s opportunity to pursue and engage with the arts may serve school performance indicators well but society badly by diminishing the arts’ distinctive capacity to create enduring social and emotional connections with others. Attaining excellence in any area requires time and focus. The foundations are best laid during school years.

Supporting education in the arts at least as strongly as in other areas will enrich our children’s lives and facilitate forms of communication, understanding, diversity in expertise, and shared interest needed to sustain a complex society. Enabling children from all backgrounds to pursue their interests with creativity, energy and to the highest possible standards, would also help to restore much of the intrinsic satisfaction that can be derived from teaching.

I taught art in a mixed comprehensive school for 23 years and I’m a grandmother whose grandchildren are about to start school. My school became a specialist science, maths and technology college but where the arts were equally valued. A curriculum where dance, music, drama and art were all delivered and provided balance and enrichment to KS3 pupils. Students were encouraged to select an arts subject at KS4 and many continued into KS5. Personally, I taught children who were academically high achievers alongside those who were registered with special needs. I witnessed those who struggled with all aspects of school life but who found sanctuary, nurture and self-esteem through the arts alongside those who were strong in sciences and maths but who found a form of expression in the arts denied them in other areas of the curriculum.

Can the government really believe these experiences should be removed from state education? Are my grandchildren going to be disadvantaged and deprived of the joy of creativity at school? I fear that, yet again, an education policy is being made by those who have no real understanding of how children learn.

While Phyllida Barlow is right to describe as philistine the exclusion of the arts from the Ebacc (Report, 9 May), a sentiment shared by Jeremy Deller and Anish Kapoor, describing this as misguided or even “outrageous” (Kapoor) lets the government off too lightly. Removing the arts from their pivotal role within education is surely part of a very conscious attempt to reposition them as mere entertainment, pastime or “interest”. As Deller remarks, the arts “free up the mind”, something a government obsessed with money, conformity and privilege cannot countenance.

In 2007, for his BBC1 series Imagine, Alan Yentob wandered about the Frieze Art Fair with £5,000 in his pocket, looking for something to buy to brighten up his living room. The idea that art might at best aspire to raise critical, engaging questions or give us new ways to think about things never got a look in. Our government seems to share Yentob’s miserable view of art as idle decoration and luxury gift. Treat it seriously and you’re asking for trouble. What was that about Plato banishing the artists?