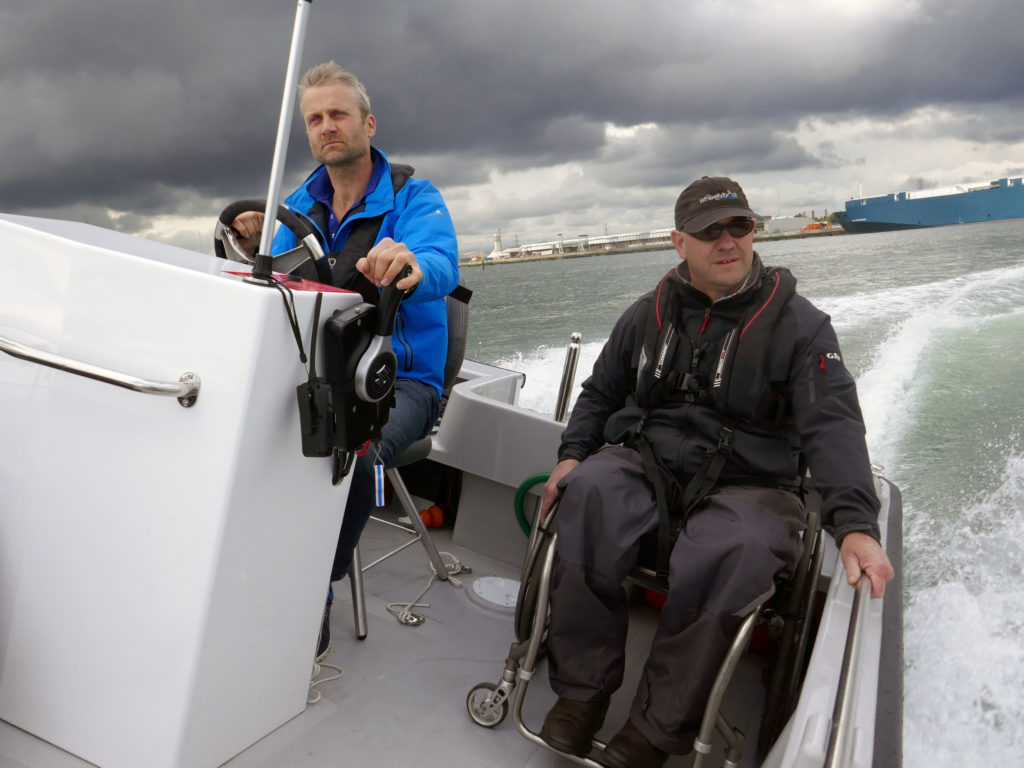 The new Wheelyboat, named Phil Braden, will be officially handed over by The Wheelyboat Trust to its new owners, SEAS @ Conway Centre, whose team will travel from its base at the Conway Centre on the Menai Straits, Anglesey, to collect their new vessel. The handover will take place this coming weekend as part of the Southampton International Boat Show. The team will then transport their new Wheelyboat back to Anglesey where a formal launch will take place on Saturday 19th October. This is the project that was featured on BBC One’s Countryfile that showcased the work of The Wheelyboat Trust last March.

Jon Gamon, Chief Instructor of SEAS @ Conway Centre, says: “The arrival of the Coulam Wheelyboat V17 will mark an enormous leap forward in the capability of the SEAS group to deliver inclusive activity. Not only will this vessel enable our disabled volunteers to take a more integral role in the delivery of sessions, but it will also open doors to new activities such as paddle sports and fishing.”

The Coulam Wheelyboat V17 is The Wheelyboat Trust’s latest model and was unveiled in June. It is the Trust’s most versatile Wheelyboat to date and enables disabled people, and wheelchair users in particular, to take part in a myriad waterborne activities. The roll-on, roll-off bow door, large open cockpit and drive-from-wheelchair helm provide a huge amount of freedom and independence. The Coulam Wheelyboat V17 can operate anywhere from leisurely pleasure boating on canals to high speed powerboating on inshore waters – it is truly a multi-purpose craft with enormous versatility.  It is designed to be used with Suzuki outboards up to 100hp at speeds in excess of 30mph but is also available as a tiller driven model for outboards up to 15hp. It is a smaller version of its big sister, the Coulam Wheelyboat V20, launched by the Trust in 2014. Like the V20, the V17 is a craft unique in its class.

SEAS @ Conway Centre was formed in 2018 to provide disabled people of all ages from North Wales with accessible sailing and boating as part of the RYA’s national Sailability programme. The group has enjoyed tremendous growth and success with hundreds of individuals participating so far. The group’s primary objectives are to enable disabled people to become physically active, improve their health and well-being and create new social opportunities by targeting inequalities in outdoor activity participation and offer greater support where barriers to regular participation exist.

As well as their four keelboats, the group currently operates a motor launch, but neither are currently accessible, so wheelchair users either have to be helped on board or they miss out. One of their volunteers, Ian, is a wheelchair user and a canoe coach. He will now be able to fully participate in the group’s sessions by providing canoe coaching from the helm of the Wheelyboat. As well as wheelchair accessible powerboating and pleasure trips, the Coulam Wheelyboat V17 will provide the group with a purpose-built craft that they can use to train and qualify their disabled members as powerboat drivers and instructors – a truly remarkable and inspirational objective thanks to their lead instructor, Jon Gamon.

Jon Gamon, Chief Instructor of SEAS at Conway Centre, says: “We are all very much looking forward to ‘Phil the boat’s’ arrival. The roll-on, roll-off capability of this boat will make an enormous difference to our wheelchair users especially who will be able to gain access to the water in the comfort of their own chair, under their own steam without the need to be helped.”

“We already have powerboat level two courses planned for wheelchair users and we have been working with and training our volunteers with the view to them becoming instructors themselves. The capabilities and build quality of the V17 is a milestone in SEAS’ long term sustainability and success.”

Andy Beadsley, Director of The Wheelyboat Trust, explains: “Providing 200 Wheelyboats in 35 years is a fantastic achievement for the charity and all involved.  From the Trust’s modest beginnings in Sussex, Wheelyboats are now available across the UK, from the north of Scotland to the west of Cornwall, and can also be found in Ireland and Denmark. Wheelyboats enable disabled people to participate alongside and on equal terms with their able-bodied counterparts in a wide variety of activities from fishing to powerboating. We’re thrilled to be able to give thousands of disabled people every year access to water-based activities via the expanding Wheelyboat fleet. The brand new V17 model is an important step forward in the continuing development of the Trust and nationwide expansion of the essential service we provide.  It will be a fantastic asset for North Wales Sailability and the Conway Centre.”

The Wheelyboat Trust was formed in 1984 and was originally called the Handicapped Anglers Trust. Founding Trustee, Alan Faulkner, conceived the idea of a Wheelyboat after his friend, Bill Buchanan, was paralysed in an accident. Bill’s accident left him a wheelchair user, but Alan was determined that in spite of this they would continue to enjoy fishing together, and from these early beginnings The Wheelyboat Trust was born.

Initially, the Trust’s principal aim was to supply fisheries with Wheelyboats, in order to provide disabled anglers with access to the water. Now, 35 years on, the Trust still supplies Wheelyboats to fisheries but also to Sailability groups, outdoor activity centres, special educational needs schools, sailing and powerboat schools, youth and community groups, canal trusts and organisations set up with the specific aim of operating their own Wheelyboat so that anyone, at any age, with any disability, can enjoy being out on the water.

Andy concludes: “After the Southampton International Boat Show, we will be turning our attention to the next launches on the horizon. So far, we have plans for Wheelyboat numbers 201, 202 and 203 to bring a wealth of possibility and excitement to those in Thames Ditton (Surrey), Wallingford (Oxfordshire) and Lough Lene (Co Westmeath, Ireland) plus seven Wheelyboats for UK fisheries, and we can’t wait to get started on the next chapter in the story of The Wheelyboat Trust.”

The Wheelyboat Trust relies on the support of individuals, companies and charitable organisations to fund its activities.

Donations can be made in a variety of ways including online at www.wheelyboats.org/donate.html.

To find out more about The Wheelyboat Trust, visit www.wheelyboats.org.

For further information on the Conway Centres, visit http://www.conwaycentres.co.uk/anglesey/