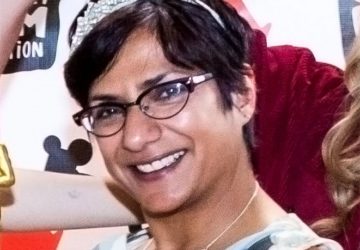 Lata Oakley started working life in the film industry in London where she worked freelance with all the major production companies such as the BBC on TV dramas and feature films. Lata has always been involved in short film productions and helped run the short film group ‘The Hallowe’en Society’ in the 90s with Philip Ilson who is now the Director of the London Short Film Festival which is part of the BFI London Film Festival.

After being inspired by a teacher who made fun films with his class, Lata had the idea that she could be a playful educator assisting with creative learning by running filmmaking clubs that would also teach some technology and storytelling skills. Over time these skills have been built on and formalised so that these clubs are also being run in secondary school media departments.

Lata works closely with the educational charity Into Film and is one of their Ambassadors.

Under her leadership, the clubs regularly send in their final productions in the Film of the Month competition, run by Into Film. The films have achieved runner-up prizes many times.

Cost: £360 + VAT (includes use of equipment, editing and publishing)

Please note: Materials are an additional cost to be arranged with the artist

The artist will contact you directly to discuss possible dates.  On occasions it may be necessary to offer you an alternative Edsential Tutor due to individual’s current commitments.