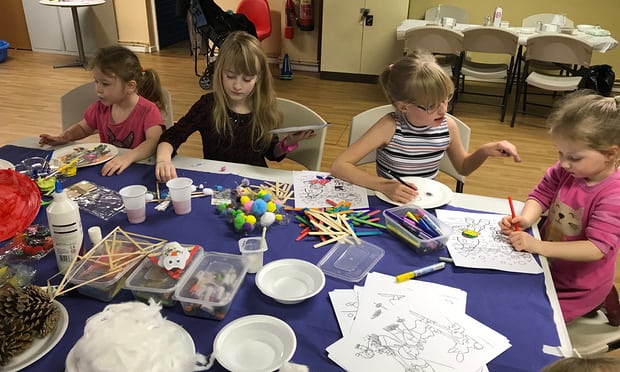 Kids’ clubs are stepping in to fill the gap and stop children going hungry during the school holidays, as families struggle with austerity

As the summer holidays begin, many families look forward to breaks away from home, in the UK and abroad. Yet for thousands of families, the six-week school break is characterised not by play schemes and day trips in the sun, but acute financial stress, hunger and malnourishment, due to the absence of free school meals for children on low incomes that costs a family £30-£40 a week.

With three million children at risk of hunger during the school holidays, the Trussell Trust has warned that food bank use spikes each summer. And last year, 593 organisations running holiday clubs across the UK provided more than 190,000 meals to over 22,000 school-aged children.

Feeding Britain, the charity set up by two Labour MPs, Emma Lewell-Buck and Frank Field, expects to provide meals for 27,000 children in 79 clubs across England this summer. In pilots in 2017, it provided a total of 43,314 meals in holiday fun clubs across eight areas, including Birkenhead, South Shields and Cornwall, in the summer holidays and October half term. Feeding Britain works with existing local charities, community groups, councils and others in the community providing funding and toolkits on how to run and roll out pilots, and creates networks for practical support. The clubs run in community centres, church halls, schools, children’s centres, libraries and parks, and they host games and activities for children, alongside breakfast, lunches, and lessons about food and nutrition for the young attendees.

Lewell-Buck, who is MP for South Shields and a member of the all-party parliamentary group (APPG) on hunger and food poverty, comes from a family “mainly of shipyard workers”. She recalls how her parents would work out shopping bills to the penny when her father was out of work. Now, through Feeding Britain, her constituents in this ex-shipping area with high unemployment and child poverty, have clubs to feed children during the holidays: “The kids play loads and loads of games, and then you have a bite to eat and learn about cooking and nutrition.” She says this mix is important.

“It’s not stigmatising, because I think if you call it a ‘hunger club’ or something like that people will feel ashamed. And they shouldn’t feel ashamed, but people do. It’s a dereliction of the state that they are in that mess.”

Feeding Britain came out of the work Lewell-Buck did when she joined Field’s APPG in 2013. “We started doing a national tour to find out what was driving people into a poverty where they couldn’t even afford to put meals on the table. And time and again the same thing was coming up: punitive welfare reform and austerity measures were leading people to levels of poverty, even those in work, that we’d never experienced before, and that was driving them to go to food banks,” she recalls. “It was just ordinary people who were struggling. And some of the charities we spoke to said there has always been this intractable group who have needed food assistance, but that has been people who are entrenched rough sleepers. Never before have you had people in work, working for their poverty. That is just a new phenomenon.”

Lewell-Buck is one of those rare MPs representing the area she grew up in. She became a local councillor at the age of 24, and worked as a child protection officer in the local council’s children’s services until she was selected as the Labour candidate for South Shields after David Miliband stood down in 2013. A quirk of timing means she has stood in three parliamentary elections for her seat in five years: “I think people are sick of seeing my face pop up on their doorsteps.”

She is currently shadow children’s minister and, as a recent social worker, is unequivocal about the challenges facing child protection. “It’s austerity. It has massively impacted on the levels of children coming into the system. The removal of all the early intervention services and downgrading of Surestart and family centres – all of that has had a massive impact. Things that used to keep children out of the system and out of care, I’ve seen it myself, they are gone. I was still in practice for the first three years [of the coalition government] and I could see things starting to change then. Now I’m in touch with a lot of my former colleagues who say it’s absolutely desperate. They just cannot stay afloat.”

Huge rise in food redistribution to people in need across UK

Later in the year, Lewell-Buck expects a second reading of her food insecurity bill: a motion demanding the government records statistics on how many people have experienced hunger or haven’t eaten because they didn’t have enough money for food. The bill has some cross-party support, but she admits some frustration at the gulf between what some Conservatives say on austerity and how they vote.

“Most MPs, no matter what party you’re from, are here [in parliament] because we care about the country and we want to make a difference,” says Lewell-Buck.

“And we care about the people coming into surgery who are telling us they’re struggling. The frustrating thing for me is that some MPs still walk through the lobby and vote with the party despite feeling that way. I couldn’t do that. I couldn’t look into the whites of the eyes of someone in my constituency who was struggling and say to them ‘I feel your pain, however I voted to increase that pain only last week.’

“I just think the indignity of what people have to go through in one of the richest countries in the world just to feed themselves is disgusting. It should be the shame of this government and it isn’t.”